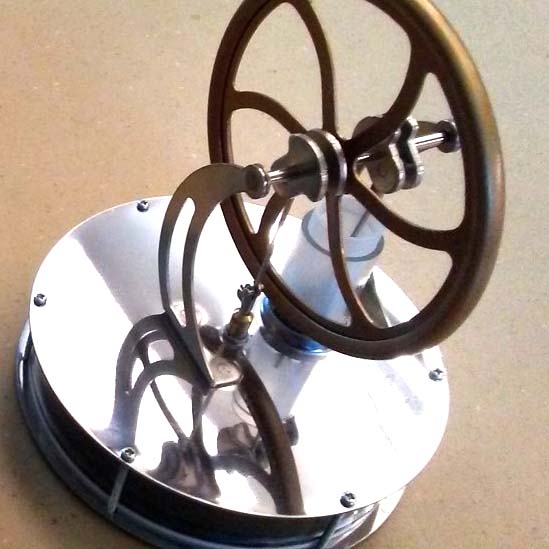 Note: A version of this story was originally posted on the Vernier website in August 2021.

For more than 20 years, Dr. Richard Stevens has provided his physics students at Whitworth University with opportunities to participate in hands-on investigations and engage in real-time data collection.

“It can be hard for students to really understand concepts when they are just being explained,” Stevens said. “Investigations provide a real-world application of a given concept—they give students a visual of what they are learning, as well as an opportunity to collect and analyze data related to that concept. Plus, it makes the learning process and concept interesting.”

One particularly interesting investigation Stevens conducts with his students involves a Stirling engine, an energy-conversion device that can be used as an engine, a refrigerator, or a heat pump.

“Stirling engines are fairly inexpensive and can operate simply by placing the engine on top of a cup of hot water or coffee,” Stevens said. “The engine uses the temperature difference between the hot drink and the surrounding air temperature to operate with no electricity required. They’re really great and appropriate devices for students to use because of minimal safety concerns.”

To modify the Stirling engine for data collection, Stevens and his students drill a small hole at the top of the engine, glue on a plastic Luer-lock nipple, and then attach a gas tube connected to a Vernier Gas Pressure Sensor to enable real-time pressure measurements on the engine while it’s running.

“It is amazing to think that the sensor can be used in this way,” Stevens said. “Students can get surprisingly clean sinusoidal waves, and it is fairly easy to measure the bore and stroke of the cylinder to get the volume change, as well as to calculate the integral of P dV and the work done by the engine over each cycle.”

To get more specific phase information, students can use a Vernier Rotary Motion Sensor and two 3D-printed gears to track the phase of the engine.

“The engine gives students a physical model and visualization to work with as they make the calculations and learn these important concepts,” Stevens said.

The Stirling engine investigation, which Stevens created with Dr. Karen Stevens and students Ryan Grady and Laura Stricker, was initially used only in an upper-level course.

“I think it is always good to start investigations such as this with older students and then move to the lower levels,” he said. “This provides an opportunity to get students’ feedback and make procedural iterations as needed. This project, in particular, was in the works and continually adjusted over several years.”

Stevens also said he has updated the investigations he conducts with his students, including the Stirling engine investigation, as data-collection technology has advanced.

“I started my teaching career with five LabPro® setups, and the collection has just grown over time,” he said. “I can’t remember a time not using Vernier as part of my instruction here at Whitworth.”

Dr. Richard Stevens is a professor in the engineering and physics department at Whitworth University, a small, nationally ranked liberal arts college in eastern Washington. He has taught at the university for more than 20 years. Getting Students Involved and Invested in Their Own Learning with User-Friendly Vernier Technology: A Q&A with Alexandra Boyd