Celebrating Latinx Scientists and Their Work: Resources for Your Classroom National Hispanic Heritage Month offers a great opportunity for students to learn about the many Latinx contributions to STEM.

During this month (which runs September 15 to October 15)—and all year—you can use the groundbreaking discoveries of Latinx scientists as the foundation for STEM learning activities.

For example, your students can perform hands-on experiments to learn about and honor the work of Evangelina Villegas and Mario Acuña, who made major advancements in biology and physics, respectively.

Your students can also do science experiments that teach them about work currently being conducted by Latinx STEM professionals, such as climate scientist Nicole Hernandez Hammer.

Whether you want to focus on the work of past or current Latinx scientists (or both), Vernier has resources and tools that can help you and your students get started right away.

Evangelina Villegas won the World Food Prize for creating quality protein maize, which “has been recognized as one of the most important contributions to food security in human history.” She was also described as “one of the original ‘superwomen’” of the International Maize and Wheat Improvement Center.

These experiments are designed to introduce students to the study of macromolecules (such as proteins, DNA, RNA, starch, glycogen, and cellulose), which are formed by connecting many smaller molecules. In these experiments students create a standard curve for protein concentrations, and then use it to determine the concentration of their sample. These experiments can be used in high school and college classrooms, and they feature the Go Direct® SpectroVis® Plus Spectrophotometer. Both experiments are also available as part of the Bio-Rad Got Protein? Kit.

Nicole Hernandez Hammer is a climate scientist and an advocate for environmental justice. While her formal training is in biology, much of her work has focused on climate change and impacts on our planet from processes such as ocean acidification. She has served as a climate science and community advocate at the Union of Concerned Scientists, and she was Michelle Obama’s special guest at the 2015 State of the Union address.

The Vernier The Greenhouse Effect experiment is a great way to teach middle school and high school students about the science behind Hernandez Hammer’s work to help combat climate change. In this experiment, students use two Vernier Stainless Steel Temperature Probes to measure and compare the temperatures in model greenhouses under various conditions.

Additionally, the Journal of Chemical Education offers the Adapting Three Classic Demonstrations To Teach Radiant Energy Trapping and Transfer As Related to the Greenhouse Effect experiment for college students to explore and learn about her work.

The first experiment is geared toward middle school and high school students, and it involves using a Magnetic Field Sensor to measure the magnetic field of the Earth, as well as the magnetic inclination of your location. 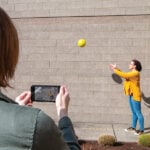