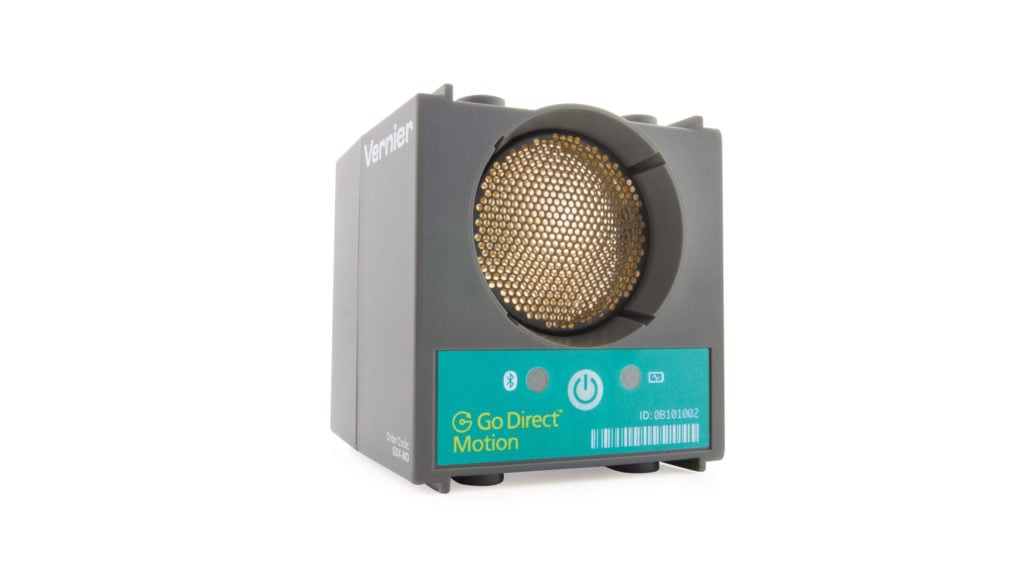 Go Direct Motion accurately tracks objects as close as 15 cm and as far away as 3.5 m. The compact design and wireless capabilities of this motion detector eliminate the concern of a dangling cable getting in the way.

Use the temperature compensation channel of Go Direct Motion to adjust for the difference in the speed of sound in cold and warm locations.

Go Direct Motion can be used in a variety of experiments:

The default channel that is active when the sensor is connected is motion. The motion channel is set to measure the distance between the sensor and the nearest object based on the speed of sound at 22°C. This channel has a high gain and is best for most uses, such as measuring the motion of a tossed ball, a walking student, or a mass on a spring.

This channel has a lower gain setting than the default motion channel. It is useful for measuring a cart on a track as this channel is less likely to pick up objects to either side of the track. Use this channel for small objects close to the motion detector.

Use the motion with TC channel for automatic temperature compensation, which adjusts the speed of sound used in the distance calculation based on an internal temperature sensor. This is particularly useful if you are using the sensor in an environment that is much warmer or much cooler than room temperature.

You can make several adjustments to the readings by zeroing and changing the direction of the coordinate system. You can find details on how to adjust these readings at www.vernier.com/til/2972

The default for this channel uses the speed of sound at 22°C. If you would like to calibrate the sensor to improve accuracy, place a hard, flat surface (such as a wall, book, or box) a known distance away from the front surface of Go Direct Motion and choose calibrate. Note that the calibration will be saved to the sensor, so the next time you use this channel it will use the previously saved value.

This channel adjusts automatically based on the temperature and cannot be calibrated.

Go Direct Motion contains a small lithium-ion battery. The system is designed to consume very little power and not put heavy demands on the battery. Although the battery is warranted for one year, the expected battery life should be several years. Replacement batteries are available from Vernier (order code: GDX-BAT-650).

To store Go Direct Motion for extended periods of time, put the device in sleep mode by holding the button down for at least three seconds. The red LED will stop flashing to show that the unit is in sleep mode. Over several months, the battery will discharge but will not be damaged. After such storage, charge the device for a few hours, and the unit will be ready to go.

Go Direct Motion is not water resistant and should never be immersed in water.

Note that Go Direct Motion will report the distance to the closest object that produces a sufficiently strong echo. Go Direct Motion can pick up objects such as chairs and tables in the cone of ultrasound.

The sensitivity of the echo detection circuitry automatically increases, in steps, every few milliseconds as the ultrasound travels out and back. This change in sensitivity enables the detection of weaker signals.

The most frequently reported problems with a motion detector are that the motion does not work beyond a certain distance or that the graph is very noisy. There are a number of ways to troubleshoot these situations, and they are described below.

An excellent discussion of motion detector theory and operation can be found in “Physics and Technical Characteristics of Ultrasonic Sonar Systems”, Dan MacIsaac and Ari Hamalainen, The Physics Teacher 40, 39–46 (January 2002).

If you have watched the related product video(s), followed the troubleshooting steps, and are still having trouble with your Go Direct Motion, contact Vernier Technical Support at support@vernier.com or call 888-837-6437. Support specialists will work with you to determine if the unit needs to be sent in for repair. At that time, a Return Merchandise Authorization (RMA) number will be issued and instructions will be communicated on how to return the unit for repair.

Warranty information for this product can be found on the Support tab at www.vernier.com/gdx-md/#support