Whether you are teaching Beer’s Law or exploring how humans use food for energy, Vernier technology and investigations will help your students better understand important chemistry concepts. Give your students insight into this vital subject with interactive learning opportunities from Vernier. With Vernier technology, you can engage students and foster a lifelong love of learning.

We are chemists, educators, and your team

We’re here to support you as an educator as you integrate data-collection technology into your teaching. See how our products provide you with affordable classroom and laboratory solutions designed for student success. Freezing and Melting of Water The primary objective of this experiment is to determine the relationship between the pressure and volume of a confined gas. The gas we use will be air, and it will be confined in a syringe connected to a Gas Pressure Sensor. When the volume of the syringe is changed by moving the piston, a change occurs in the pressure exerted by the confined gas. This pressure change will be monitored using a Gas Pressure Sensor. It is assumed that temperature will be constant throughout the experiment. Pressure and volume data pairs will be collected during this experiment and then analyzed. From the data and graph, you should be able to determine what kind of mathematical relationship exists between the pressure and volume of the confined gas. Historically, this relationship was first established by Robert Boyle in 1662 and has since been known as Boyle’s law. You will encounter two types of organic compounds in this experiment—alkanes and alcohols. The two alkanes are n-pentane, C5H12, and n-hexane, C6H14. In addition to carbon and hydrogen atoms, alcohols also contain the -OH functional group. Methanol, CH3OH, and ethanol, C2H5OH, are two of the alcohols that we will use in this experiment. You will examine the molecular structure of alkanes and alcohols for the presence and relative strength of two intermolecular forces—hydrogen bonding and dispersion forces. 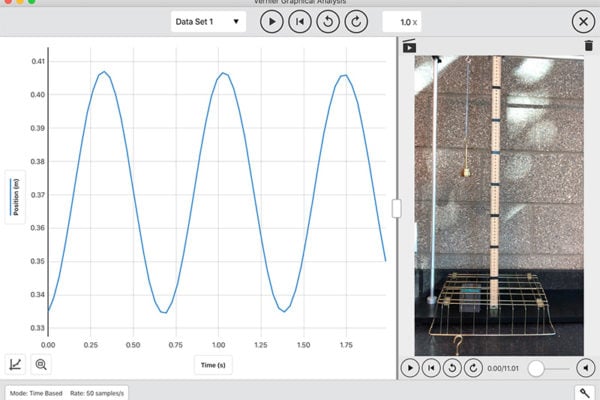 With the new Graphical Analysis™ Pro app, users can insert, view, and sync a video to sensor data for inspection and analysis. This app is perfect for engaging students—either remotely or in the lab—in more advanced analysis of data from biology, chemistry, and physics experiments.