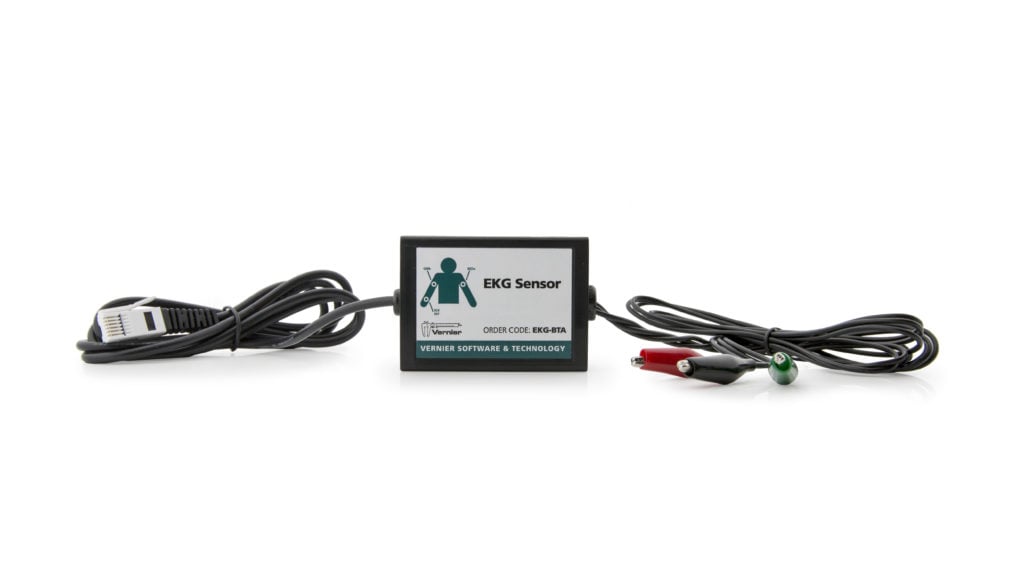 The Vernier EKG (Electrocardiogram or ECG) Sensor measures electrical potential waveforms (voltages produced during the contraction of muscles). The following is a partial list of activities and experiments that can be performed using this sensor:

Note: Vernier products are designed for educational use. Our products are not designed nor recommended for any industrial, medical, or commercial process such as life support, patient diagnosis, control of a manufacturing process, or industrial testing of any kind.

This sensor will be automatically identified by Logger Pro or LabQuest 2 App. Use the following instructions for best results. To conduct EMGs, the red and green leads need to be placed on electrodes that are attached to the muscle of interest. The two leads are interchangeable for EMGs.

The electromyogram (EMG) is a graphic tracing of a muscle's electrical activity. The EMG is an extracellular surface recording of the action potentials that occur during a muscle contraction.

Muscle cells are polarized at rest. This means the cells have slightly unequal concentrations of ions across their cell membranes. An excess of positive sodium ions on the outside of the membrane causes the outside of the membrane to have a positive charge relative to the inside of the membrane. The inside of the cell is at a potential of about 90 millivolts (mV) less than the outside of the cell membrane. The 90 mV difference is called the resting potential. The typical cell membrane is relatively impermeable to the entry of sodium. However, stimulation of a muscle cell causes an increase in its permeability to sodium. Sodium ions migrate into the cell through the opening of voltage-gated sodium channels. This causes a change (depolarization) in the electrical field around the cell. This change in cell potential from negative to positive and back is a voltage pulse called an action potential. In muscle cells, action potential triggers muscle contractions.

When a portion of the heart is polarized and the adjacent portion is depolarized, an electrical current is created that moves through the body. This current is greatest when one half of the connected portion of the heart is polarized and the adjacent half is not polarized. The current decreases when the ratio of polarized tissue to non-polarized tissue is less than one to one. The changes in these currents can be measured, amplified, and plotted over time. The EKG represents the summation of all the action potentials from the heart, as detected on the surface of the body. It does not measure the mechanical contractions of the heart directly.

The impulse originating at the SA node causes the atria to contract, forcing blood into the ventricles. Shortly after this contraction, the ventricles contract due to the signal conducted to them from the atria. The blood leaves the ventricles through the aorta and pulmonary artery. The polarity of the cardiac‑muscle cells returns to normal and the heart cycle starts again.

The electrocardiogram (EKG) is a graphic tracing of the heart’s electrical activity.

The five major deflections on a normal EKG are designated by the letters P, Q, R, S, and T. One heart cycle is represented by a group of waveforms beginning with the P wave, followed by the QRS wave complex, and ending with the T wave. Electrical energy is also generated by skeletal muscle, and can be seen as muscle artifacts if your arm is moved while the EKG is attached. The sequence from P wave to P wave represents one heart cycle. The number of cycles in a minute is called the heart rate and is typically 55–75 beats per minute at rest.

Some typical times for portions of the EKG are

If your EKG does not correspond to the above numbers, do not be alarmed. These numbers represent typical averages and many healthy hearts have data that fall outside of these parameters. To read an EKG effectively takes considerable training and skill. This sensor is not intended for medical diagnoses.

You should never have to calibrate the EKG Sensor. Because you are primarily interested in the shape and periodicity of the signal, the EKG sensor does not need to be calibrated.

For troubleshooting and FAQs, see www.vernier.com/til/1415

If you have watched the related product video(s), followed the troubleshooting steps, and are still having trouble with your EKG Sensor, contact Vernier Technical Support at support@vernier.com or call 888-837-6437. Support specialists will work with you to determine if the unit needs to be sent in for repair. At that time, a Return Merchandise Authorization (RMA) number will be issued and instructions will be communicated on how to return the unit for repair.

Vernier warrants this product to be free from defects in materials and workmanship for a period of five years from the date of shipment to the customer. This warranty does not cover damage to the product caused by abuse or improper use.